OK, I was having a discussion with a friend about Bella's reading habits, and how the series uses Bella's reading to support the assertion that she's intelligent, but I can't recall any instances of her reading a new book, only rereading books. That seems to me to counter the intelligence argument and indicate that she feels she's kinda done learning. Anybody know off the top of their head what books Bella reads or buys in the series and if any of them are new to her?

peskywhistpaw
Fandom: Twilight
Pairing: Rosalie/Leah
Rating: R, for strong language and mild sexuality
Length: 02:45:04
Link to text version: LJ | AO3
Summary: Rosalie does not simply move through the forest, she is a part of it, and it suits her in the strange way that it suits Leah. How two lonely, broken, wild things of the woods connect with each other and rediscover their humanity. 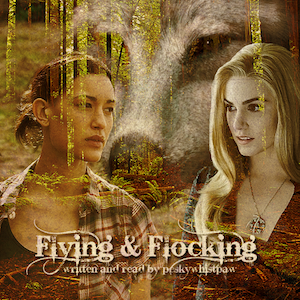 However, I didn't know where else to share this.

Has anyone here come across/heard of "50 Shades Of Grey?" Do you know of the story behind it?
I feel like I have to get my opinion of it off of my chest. So here it goes!

It was...horrendous. Cheap. Badly-written. The worst part? It is a legit copyrighted FANFICTION about E/B. Yes, I know the author (whom I have some not-so-nice words for) changed the names, physical descriptions around but that was really about it. My friend has the actual book "series" if you will, while I have the copy of the fanfiction it was "loosely based off of" read COPIED FROM- "Master Of The Universe." We compared each page and they are the same thing, no matter what E. L. James says.
These three books have taken the 1st-3rd spot on the NY Bestsellers list and 1-3 on Amazon's Kindle sales.

I can't even begin to explain how frustrating and infuriating I find this. A TWI-MOM (seriously, she first posted the story on twi-mom.net) writes a supposedly steamy AH/AU BDSM lemon about Edward & Bella and then instead of writing something I dunno...original in plot and characters, she literally changes the names to Christian Grey & Anastasia Steele, changes their hair/eye colors and changes the names of things like Cullen Enterprise Holdings to Grey Enterprise Holdings. She has no imagination whatsoever in the changes, and then she's able to get away with publishing and now is making untold amounts of money from the series and also now the movie rights have been bought. Ugh. There is even talk of them trying to pursue Rob & Kristen themselves for the leads. The fanfiction also included a very bullshit version of our dearly beloved Jacob who apparently just doesn't know what "No" means if you catch my drift.

I dunno, but as a fanfiction writer and s someone who is currently trying to write their own novel- this just smacks of cheating. I feel like ANYONE can now write a book and if it's steamy enough (and honestly, this is like a badly written harlequin romance with some Dominance/Submissive thrown in just for GP) and self-publish it then gain readers who only read it because it's a lemon and then boom it's popular enough for a huge publishing house to buy out the rights for it and the rest is history.

How do you feel about this idea? Have you read it? What did you think of it? I know quite a few of fanfiction authors who's stories were way better written and could probably get away with doing the same thing. But does that make it ok?

I tried to post this here months ago, but for some reason, it didn't go through. We'll see if it does this time, I guess. Yay!

Title: Flying and Flocking
Fandom: Twilight
Pairing: Rosalie/Leah
Rating: R, for strong language and mild sexuality
Word Count: ~22,800 total
Summary: Rosalie does not simply move through the forest, she is a part of it, and it suits her in the strange way that it suits Leah. How two lonely, broken, wild things of the woods connect with each other and rediscover their humanity.
Author's Notes: God, this fic. I love this fic. Here are my original author's notes, with the fic originally posted here on AO3: Endless thank-yous to my betas

masagoroll for their absolutely invaluable help. The title is from one of the tracks on Zoe Keating's beautiful instrumental album "Into The Trees." I did not write a word of "Flying and Flocking" without this CD playing, and thus it really helped shape the mood of the story. You may want to track it down for yourself to listen to as you read. There are a few background pairings, both implicit and explicit, drawn from where the canon stands (or seems to stand) at the end of Breaking Dawn, so keep that in mind. All characterizations and past events are meant to be canon-compliant. Lovely complementary artwork is here!

I've decided to try and get a read on the age and romantic history demographics of the different Twilight Teams. Because I don't have anything better to do, obviously.

Please take a moment to fill this out (seriously, it's six questions) and then pass it on to other folks -- particularly Team Edward people, if you know any! I'm trying to get representation across the board...

Did I just write non-J/B PWP? Hell yes I did.

Summary:
Seth has a thing for Kim, and Jared doesn't mind. Unapologetic fluffsmut.


( Seth walked into Kim's bedroom and found that Kim was not technically wearing clothes. )

Title: The Red Wish
Author: runsamrun
Fandom/Pairing: Twilight, J/B
Rating: T
Summary: I wished for Edward Cullen to come back. And he did. (Set during New Moon-ish.)

“Right, because it’s a good idea to put another hole in the car.” Bella rolled her eyes at him. - A sequel to Not What I Used to Be.

daintress
Characters/Pairing: E/B
Rating: R(ish)
Category: Romance
Spoilers: Not Really
Summary: “I’m not certain there’s anything you can do. Be there for her. Don’t provoke her, but don’t let her isolate herself anymore. And call Eleazar and Carmen home early. I fear having Bella here has been as bad for Irina as it’s been good for Edward.” - A sequel to Not What I Used to Be.

daintress
Characters/Pairing: E/B
Rating: R(ish)
Category: Romance
Spoilers: Not Really
Summary: Just as Edward reached them, he closed his eyes briefly, then scowled at Jacob. “Well deserved but unnecessary. Bella kindly explained to me what an utter idiot I’ve been.”